​He's part of America's greatest generation and this year Auroran and WWII Navy Veternan Norman Rebenstorf celebrated his 99th birthday and was honored with a mini-parade in front of his residential nursing home. 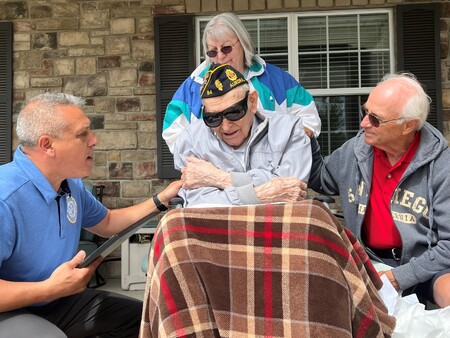 He was saluted by fellow veterans from World War II, Vietnam, and Korea, who sang happy birthday to him. In addition, the Aurora hometown hero received gifts from friends, was recognized with service mementos from veterans' organizations, and was presented with awards and proclamations from the mayor and governor.

Rebenstorf was born in Aurora, graduated from East Aurora High School, and enlisted in the United States Navy the same year, where he served in the South Pacific until the end of World War II.

June 11 is now Norman Rebenstorf day in the City of Aurora, and his family looks forward to a big celebration next year for his 100th birthday.